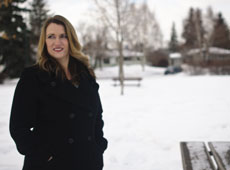 Proponents of alternative housing argue that as Calgary grows, urban development must also evolve. They say members of the community should be able to afford to stay for the long haul instead of being pushed out by rising prices and a lack of housing availability at any stage of life.

One option is rebuilding from the inside to include more options through multi-family housing for inner-city people, instead of building outward onto the city’s borders.

“It’s not that people are afraid of rezoning, it’s that they’re afraid of what they don’t know,” says Maxine Morrison, real estate agent and president of the Haysboro Community Association.

But advocates of this strategy say the biggest obstacle in the way of rezoning, or land use re-designation, in established neighbourhoods is current homeowners’ unrealistic perceptions of what this means as a reality in their neighbourhood.

Homeowner and landlord Yasmin Dean says Calgarians seem to maintain a sense of entitlement and individualism that is unique.

“Everybody thinks that the roadway outside their house is their property,” she says. “Maybe it’s that sort of homestead perspective on the world.”

She says the majority of other urban cities in the world she’s spent time in share a collectivist view, in that they’re more open to sharing living spaces.

Dean says, “For good reason, we were spread out before. But now as more and more people come into the city and we’re starting to recognize the costs environmentally on a lot of those resources, people do want more walkable, urban communities. And I think there’s a shift in what people are looking for.”

Changing the culture of Calgary

In 2010, Mayor Nenshi campaigned on a platform known as 12 better ideas for Calgary. Many of these ideas revolve around an effort to increase affordable housing by reducing urban sprawl and suburban growth.

First on the mayor’s list of better ideas for our city is that “Calgary will be a city where secondary suites provide a safe and legal option for affordable housing.”

A secondary suite is defined on the City of Calgary’s website as a “self-contained living space consisting of a bedroom, bathroom and kitchen located within or on the same property as a single-family home.”

Some progress has since been made on this issue. In April 2013, all new communities built on the outskirts of Calgary were approved for the appropriate zoning to allow for secondary suites. This decision came about a month after council rejected a proposal supported by the mayor that would have allowed zoning for secondary suites anywhere in the city.

However, obtaining the proper zoning permit to build up and allow for higher density living in established neighbourhoods can be a challenge.

Dean owns both a duplex in Capitol Hill and a bungalow in Charleswood as long-term investment properties. Her bungalow has been converted into both a main level, where she lives, and furnished basement suite that she rents out to a single tenant.

Her basement suite is ‘non-conforming,’ meaning the suite was built legally at the time of construction, but it doesn’t meet present-day rules. Therefore, it’s not compliant with the current neighbourhood zoning.

Charleswood is zoned as R-C1 residential and she would need to apply for R-C2 or R-2 land use re-designation for her basement apartment to be fully legal.

Dean explains that to be considered a safe and legal suite, in addition to having the correct zoning permit for multi-family housing, the unit must meet certain requirements. Some of these include being separated by firewalls, having a separate furnace and large access points.

She says the reality is that most rental suites do not meet these requirements.

The process to convert a portion of a home into a legal suite is a lengthy one. Morrison says this process gets in the way of creating legal suites that protect the safety of renters.

The eight-page application checklist for rezoning includes items such as 25 copies of site plans of the homeowner’s land, which has on its own a list of 10 necessary requirements including noise exposure forecast, and plotting and labelling signs and parking, among other things.

The application must be submitted in person and the 2014 list of application fees can run up to thousands of dollars, depending on the zoning district and land use designation a person is applying for.

Morrison supports rezoning, but also believes that council needs to be very strategic about redevelopment in established neighbourhoods like Haysboro, where she lives. She says she does not agree with the proposal that secondary suites should be allowed across the entire city, as they do not fit with the culture of every neighbourhood.

Pincott says, “People have a lot of fears about what secondary suites mean for their neighbourhood.”

When Mayor Nenshi was first elected, the Haysboro Community Association conducted a survey to measure sentiments around rezoning. Morrison says the majority of residents there — who she says represent a well-balanced range from 20-somethings to seniors — said they were not in favour.

Some of these fears include lack of parking and generalizations about renters’ attitudes or cares for the community they live in.

“In recognizing those fears,” says Pincott, “I think we need to take the time and show people that they are unsound fears. Their fears about destroying a neighbourhood or community if secondary suites are allowed are not real.”
Morrison argues that the best course of action would be to start with more inner city test communities first, like those close to LRT stations where higher density makes sense. She adds it’s important to engage with residents to decide where it’s appropriate to rezone based on the culture of that community.

She gives the example of a fourplex that was built in the S.W. community of Kelvin Grove, a neighbourhood that boasts very large expensive homes.

“If I did buy in that area, I don’t think I’d be okay with that happening,” she says.

Ward 9 Coun. Gian-Carlo Carra, former Calgary urban planner in sustainable design, says he believes that allowing zoning for more multi-level housing inner city will open up the rental market to those who crave to live in more wholly livable neighbourhoods — ones that meet all their needs in one district.

“The basic design of the sustainable city is the neighbourhood,” says Carra. “A complete, compact, walkable neighbourhood linked with other neighbourhoods through transit systems.”

Inner-city living is desirable, but also expensive. And as developers continue to build outward, suburban communities seem to be one of the few affordable housing options.

According to the 2013 census, the N.W. suburban community of Evanston has shown the greatest rise in population density in Calgary with an additional 1,680 residents over the last year.

Even so, resources in new communities such as schools, fire halls and recreation centres are few and far between. People are spending more money on transportation costs as these areas cannot sustain all the residents’ needs.

“It costs $5 million or $7 million to build a fire hall. That’s no big deal,” says Pincott. “The challenge is that year over year we’ve got to have 25 firefighters in that hall and that costs millions of dollars every year.”

Carra argues that it’s the division of zoning into single-use residential, commercial and industrial districts that keeps Calgary from thriving as an urban, sustainable city.

“It’s not a question of this as being a residential neighbourhood,” says Carra. “People live in the city. It’s a question of how intensely and densely they live there.”

Morrison argues that a person should be able to stay in their neighbourhood indefinitely. A sustainable neighbourhood, she says, should allow a person to start out in a rental property, purchase a home and eventually move into a retirement or assisted-living facility — all without having to leave the community they call home.