Alternatives explored to help people find homes they can afford 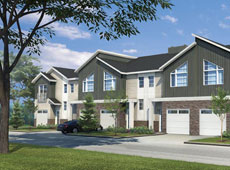 As an oil and gas boom town many want a piece of what Calgary has to offer. But behind the lure of money and jobs there is a housing crunch — one that some say isn’t going away anytime soon.

With about 830 people migrating to the city each month, a young population and a relatively high birth rate, the housing supply isn’t stacking up to the demand. Also, the gap between income and housing costs in Calgary is a growing one, leaving many unable to afford housing in the city.

But, there are alternatives that are being explored for low-income and middle-income Calgarians.

One of the alternatives are secondary suites, something that Calgary realtor Miki Somos knows all about and thinks are a value to the city.

He explained that secondary suites are an opportunity to increase the amount of affordable housing in the city.

“Many new people are coming here, however, if they have no place or no affordable place to live they won’t stay. No one wants to work just to be able to afford a place to live.”

Somos currently has three secondary suites in his rental properties and though he doesn’t have one at his own residence he said he would like to.

“We do not have a suite in our own house because it’s not currently allowed by city zoning,” Somos said. “My parents and my sister converted a large suburban home with a walkout basement into a two-generation home with a legal suite. This issue is very close to me.”

Somos said the city should legalize secondary suites like other major Canadian cities, but there needs to be a review of zoning laws and building-code rules.

For Somos, homeowners should have the choice and right to have a secondary suite in their homes. Though he wants to see the suites legalized across the city, he believes that nothing will be different until zoning rules and building codes are changed.

“We as homeowners need to have a choice and the right to create secondary suites in our homes if we choose to,” Somos said. “Even if we approve the city wide suites under current rules, it will have a very minimal impact and I still won’t be able to add a suite to my own home because of land-size restrictions. City-wide approval would, in my mind, be a small step forward, not a major change as many people think.”

“It’s very difficult to maintain investment properties at the current real estate prices,” he said. “I personally would like to add a secondary suite into my home. It will be a suite that I can rent to students or space for my family to stay in for extended periods of time.”

Somos explained that there are many reasons why secondary suites are valuable.

“Affordability is the key, not just for the renters but for the homebuyers. With current pricing families can’t afford a single-family home and have to turn to condos,” he said. “Secondary suites can make home ownership possible.”

Somos said that people may also want secondary suites because “the aging population will be able to stay in their homes.”

“People who bought their homes 10 to 20 years ago are now facing high tax bills due to the property value increase and higher operating costs,” Somos said. “This is a challenge for the fixed-income individual. By allowing the suites, seniors will be able to keep their homes, stay in the neighbourhoods they love and new affordable housing will be created at the same time.”

“Parents and kids can live together, either as a growing family, or as adult kids or aging parents. They can help each other in different stages of their lives.”

And of course, secondary suites provide an investment opportunity.

Somos said this would provide “more affordable housing for tenants and more cash flow for investors.”

The Calgary Homeless Foundation reported that as of 2012, 3,500 Calgarians are sleeping on the streets or in shelters. The report also highlights that as many as 14,000 Calgary households are having trouble affording their rent, putting them at a greater risk for homelessness. One of the ways the Calgary Homeless Foundation wants to address this issue is through seeking the City’s support for more secondary suites that will introduce more options into the tight housing market.

In a fact sheet, provided by the Calgary Homeless Foundation they call for the legalization of secondary suites saying it would not only “provide housing to low income groups,” but it would also improve property values of the homes with secondary suites, as well as other homes in the same neighbourhood.

The fact sheet also explains, “Homeowners who want to build a secondary suite in most neighbourhoods must get a land use amendment by appearing before City Council, which is time consuming, expensive and arbitrary.”

The Calgary Homeless Foundation is in favour of simplifying the process for creating secondary suites and proposes “…a new land-use bylaw that allows secondary suites in all residential neighbourhoods. Basement suites would need a building permit only. Garden suites or over-garage suites would require a development permit and could be appealed to the Subdivision and Development Board.”

Legalizing secondary suites is something that Ward 11 Coun. Brian Pincott agrees with. He said that because Calgary is a desirable place to be for many people, more demands are placed on housing and there needs to be more options. Pincott said he thinks that the city needs to solve the housing crunch and one way of doing that is by increasing the housing stock.

“We are losing rental properties. We need to look at secondary suites everywhere and make that a choice people can have, to have secondary suites in their home,” Pincott explained. “It improves the affordability for the person owning the home, but it also creates another affordable unit in the suite itself.”

Other Calgary realtors are also seeing the need for secondary suites.

Sano Stante is a Calgary realtor who agrees that secondary suites should be legalized in all zones and in certain areas be legal where the primary residence is still inhabited by the owner. He said secondary suites fill a need for people who can’t afford to rent apartments.

“There is a niche for secondary suites,” Stante said.

Calgary realtor Somos explained that the fears surrounding secondary suites are nothing to be worried about.

“The main fear is that if neighbourhoods become overrun by rental suites, the quality of life and the value of real estate will decrease,” Somos said. “People feel that the city should have no right to change the zoning after people own the homes. People claim they’ve chosen the area because it’s only for single-family homes and they want it to stay that way.”

But, Somos provides Edmonton as a prime example of how secondary suites can work.

Help for the middle class

Aside from secondary suites, the middle-class has options to get help in order to buy a home in this market.

Attainable Homes Calgary Corporation is a non-profit subsidiary of the City of Calgary and they are part of the city’s 10-year plan to end homelessness. This program is designed to get middle-income Calgarians into a home of their own. Attainable Homes’ strategy is to help get middle-income Calgarians into their own homes, in hopes that this could help ease the strain on the rental market and the need for secondary suites.

“There is a widening gap between house prices and wages in Calgary,” David Watson, president and CEO of Attainable Homes Calgary said. He explained that the program is designed for people with jobs that could pay rent or a mortgage but might have “challenges with a down payment.”

In 2011, the average cost of rent was $1,102 making rent affordable only if a person’s annual income was around the $44,000 mark. To buy in the market, Calgarians need an income of at least $75,000 to make it affordable. These numbers from the City demonstrate the gap that some say needs to be addressed.

The lack of available homes increases the price on rental suites and home ownership. In response to this, the City of Calgary has programs in place to try to help get more people into homes of their own, hopefully freeing up rental units in the city.

Watson explained that applicants in the program must put a minimum of $2,000 down and the rest of the down payment is gifted by Attainable Homes. The homes are projects specifically for Attainable Homes. If the purchasers decide to sell Attainable Homes shares, the money then goes back into the program. Homeowners can sell to whomever they want as it’s important to get the market value for the home to keep the program going.

Homeowners are able to sell at any time but will make the most back by owning the property for a minimum of three years.

There is no minimum income level for the program but applicants must show that they have some sort of savings and income on top of the $2,000 down. He explained that anyone can use the program up to a household income of $90,000 where children live in the home and $80,000 without children. The program has also seen recent university graduates that don’t want to rent anymore as well.

Though Watson said this program can help to ease the housing crunch in Calgary, it’s by no means a way to fix everything and “the numbers are modest,” he said. “The well-off have [housing] choices but the poor don’t have choices.” The hope with the program is that some of this work being done with middle-income Calgarians will “trickle down to the shelters.”

Watson said the program has had a strong year and he “certainly has seen a big uptake since the middle of the year” when the flooding happened.

Though the program is helping, Watson said he doesn’t see any ultimate solution coming anytime soon.

“The [housing] problem isn’t going to go away and I think it’s going to get worse,” Watson said.

But there are other alternatives that Calgarians are turning to, such as Housing Co-ops and Cohousing that can be considered.