Throughout the Calgary Journal’s extensive coverage on secondary suites, overarching patterns and issues involving these developments were uncovered.

If a Calgarian wishes to apply for a development permit they must go through the City of Calgary Development Authority, which manages developments throughout the city and also classifies each suite as legal, illegal or non-conforming.

Illegal suites are those that are either built without a permit or do not meet building codes.

Non-conforming suites are those that may have met building codes at the time of construction – but do not meet present-day codes.

If any neighbours or communities are against the developments, they can appeal the secondary suite development permit application to the Subdivision and Appeal Board and a hearing will be held.

The issues commonly seen at these hearings, such as privacy, parking, and noise are not strictly native to Calgary.

But there are other Canadian cities that Calgary may be able to look to when managing and approving these developments which many argue would create more affordable housing.

In Cochrane – about 30 km northwest of Calgary – there are fewer secondary suites, but the town of over 17,000 still tries to support the developments.

Kathy Dietrich, manager of planning and engineering services in Cochrane, says that this type of housing helps fit the need of affordability in the community.

“I’d say we are quite supportive. We even sometimes host a type of workshop that helps people through the approval process,” says Dietrich.

Jeff and Liz Courtney took advantage of this workshop when they decided to turn their unfinished Cochrane basement into a suite.

Jeff says,“The main reason was to retire early. We both wanted to stop working and we knew with the strong renters market, there was a good demand for rental suites in Cochrane.”

Although some of these issues were of concern to the Courtneys’ neighbours, none of them appealed the development. Instead, they sorted out their issues personally instead of resulting to a City-held hearing, which is the norm in Calgary.

This is possible in Cochrane because of the driving guidelines for secondary suite developments: a maximum of 10 per cent of houses per neighbourhood or area can contain secondary suites.

“There are some concerns in communities that if you have too many secondary suites then you can run into issues,” says Dietrich. “Keeping to the 10 per cent really helps find that balance.”

A neighbour can appeal the development if they have issues with parking, privacy or noise, but the usual reason for the denial of application is if the number of suites exceeds the 10 per cent maximum in that neighbourhood.

In the Courtneys’ case, they were the third house in their neighbourhood to pursue a development – out of 300 houses. 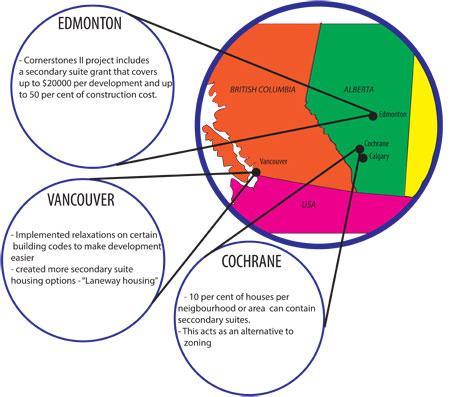 This grant is part of Edmonton’s Cornerstones II housing initiative – a five-year plan scheduled to run from 2012 to 2016.

According to the City of Edmonton’s website, the first Cornerstones project, which ran from 2006 to 2011, helped create and improve 553 secondary suites.

Cornerstones II plans to do the same for an additional 450 suites.

Gail Hickmore, Edmonton’s general supervisor for development says, “the program provides up to $20,000 per secondary suite and no greater than 50 per cent of the eligible construction costs.”

In 2009, the City of Calgary launched a similar pilot program. The secondary suite grant program offers homeowners up to $25,000 or nor more than 70 per cent of the total cost to develop a secondary suite or to bring an existing suite up to code. However, the entirety of the $6 million program funding has already been allocated. A second phase has not been reinstated.

Edmonton still sees several neighbours appeal proposed developments – many of which deal with the same issues as Calgary – but Hickmore says parking is the most prominent.

From Dec. 1, 2007 to Sept. 10, 2013 there were 1,502 basement suites, garden suites and garage suites, says Hickmore. “The majority of those are basement suites because they are easier to approve,” she says.

Calgarians have been struggling to find affordable housing, but Vancouver’s housing market has even more problems with affordability.

However, Vancouver has not implemented and secondary suite grant program but the City has been taking some steps to making affordable housing more accessible for its citizens.

One step was a relaxation of certain building codes when developing a secondary suite.

According to the City of Vancouver website, these relaxations include:

Vancouver has also begun to offer more options for secondary suites, one of which is a laneway house.

These developments are smaller houses, usually containing one or two bedrooms, depending on the size of the lot. The suites take the place of a garage.

Tyler Littlefoot, a 23-year-old student at the University of British Columbia, considers himself lucky with the basement suite he found near his school.

“A single student can’t be paying $1,000 a month to live here,” says Littlefoot, who rents basement suite with three other people for $3,000 per month including utilities.

“We actually have tons of parking space, which was a big factor when I was looking for a place,” he says.

Littlefoot says that the relatively inexpensive rent is most likely because of its close proximity to a freeway.

This may have discouraged renters in the past, but for Littlefoot, he’s just glad it cuts time off the commute to school.

As of now, it seems Calgary is stuck in a political limbo in regards to secondary suites. Citizens will have to wait until Council can come to an amiable compromise.